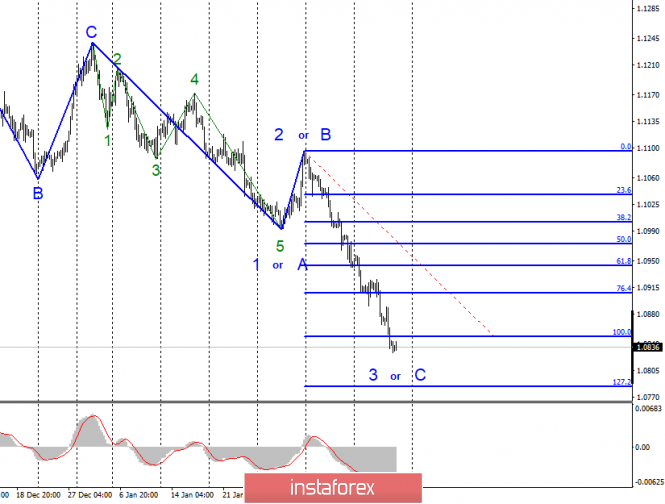 On February 13, EUR / USD pair lost about 30 basis points and continued, thus building supposed wave 3 or C. I changed the last version of the current wave marking, since the prospective wave 1 in 3 or C is too extensive, and most of all, it’s not just in the first wave 3 or C, and in fact, the whole wave 3 or C. Due to the very strong downward movement and very small correction waves, the internal wave structure of wave 3 or C does not have a pronounced five-wave structure that could be clearly seen. Currently, wave 3 or C has exceeded the size of wave 1 or A. An unsuccessful attempt to break through the 127.2% level may lead to quotes moving away from the lows reached.

Yesterday’s news background was extremely interesting again for the euro/dollar instrument. Despite the fact that inflation in Germany coincided with the expectations of the currency market, the demand for the Euro currency continued to decline, as American inflation continued to accelerate and amounted to as much as 2.5% YoY in January. Of course, such a high value can not but rejoice the Fed, which has regularly complained of weak inflation in recent years. Now, the chances that the Federal Reserve will lower its key rate in 2020 are even lower. This means that the American economy continues to strengthen, which is good for the dollar and buyers of American currency.

On Friday, the euro/dollar instrument may well continue to decline, as the news background will be strong again, which means that markets can find new reasons and reasons to lower demand for the euro. In Germany, a fourth quarter GDP report has already been released, which is predictably reduced to 0.4% y / y. Now, the next step is the Eurozone GDP report, where 1.0% y / y is expected, and in the afternoon – retail sales in the USA, industrial production and consumer confidence index from the University of Michigan. Judging by the forecasts, one can’t expect anything optimistic from European statistics again, although this time, the American one may cause disappointment in the markets, as retail sales have neutral expectations, industrial production may again lose 0.2% compared to the previous period, and the consumer confidence index drops to 99.5.

The euro-dollar pair continues to build a downward set of waves. Since the current wave counting has changed, I recommend that those who are already in sales, stay in them with goals located near the calculated level of 1.0784, which corresponds to 127.2% Fibonacci. On the other hand, I don’t recommend thinking about purchases, too strong downward trend. 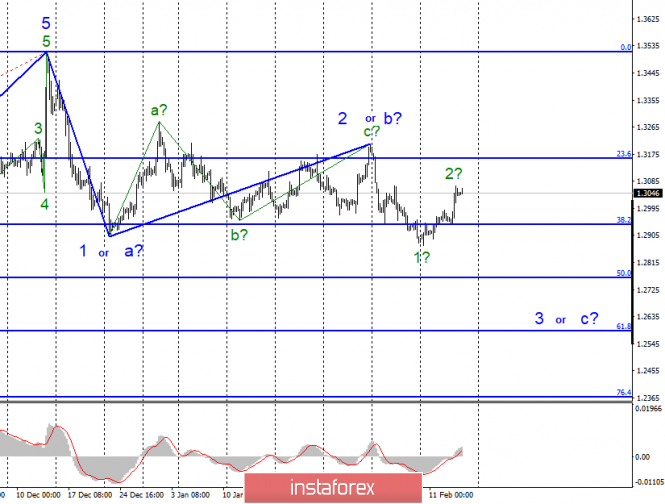 On February 13, GBP / USD added 75 basis points, which also led to a change in the current wave count. Wave 3 or C is still continuing its construction, but its internal wave structure is becoming more complicated and can take on a very non-standard form. For example, the alleged wave 1 in 3 or C has a pronounced 3-wave form, which does not coincide with the requirements of the impulse section of the trend. At the moment, the instrument is supposedly at the stage of building wave 2, which also does not fit too well into the overall picture of wave 3 or C, since it already has a fairly long view. However, until the current wave count remains valid, I recommend waiting for the construction of wave 3 in 3 or C.

The news background for the GBP / USD instrument on Thursday came down only to the US inflation report. If on EUR / USD, this report caused an increase in demand for the dollar, then the reaction was the opposite on GBP / USD. From which the conclusion follows: the British was influenced by other factors. And unfortunately, these factors are political again, not economic. Yesterday, it became known that British Prime Minister Boris Johnson dismissed five ministers at once and, in particular, Finance Minister Sajid Javid. The resonant event, which did not affect the UK economy in any way, provoked a positive reaction from the markets, which increased the demand for the British currency. However, based on the current wave markup, the decline in the instrument’s quotes should resume in the near future. Today, the news background from Britain is empty, so only us news remains, which should be better than market expectations in order to trigger an increase in demand for the dollar and for the instrument to move to building a 3 in wave 3 or C.

The pound-dollar instrument construction continues downward wave 3 or C. Thus, I recommend resuming sales of the instrument by the MACD signal “down” with targets located near the level of 1.2767, which corresponds to 50.0% Fibonacci.

Intraday technical levels and trading recommendations for EUR/USD for July 24, 2018