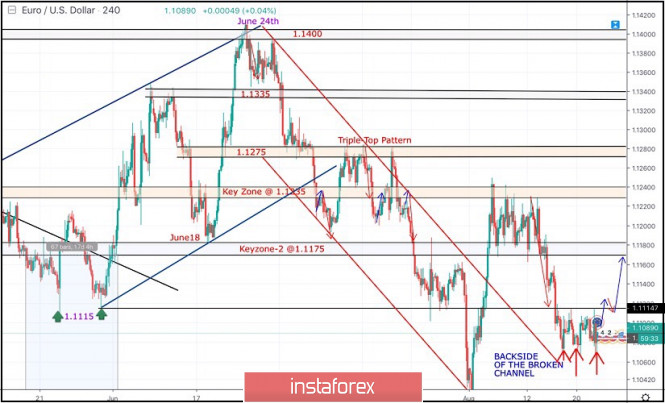 Back in June 24, the EURUSD looked overbought around 1.1400 facing a confluence of supply levels which generated significant bearish pressure over the pair.

Shortly after, In the period between 8 – 22 July, a sideway consolidation-range was established between 1.1200 – 1.1275 until a triple-top reversal pattern was demonstrated around the upper limit.

This facilitated further bearish decline towards 1.1115 (Previous Weekly Low) then 1.1025 (the lower limit of the depicted recent bearish channel) where significant signs of bullish recovery were demonstrated.

Risky traders were advised to look for bullish breakout above 1.1050 as a bullish signal for Intraday BUY entry with bullish targets around (1.1115, 1.1175 and 1.1235). All of which were successfully reached.

For the past two weeks, the depicted Key-Zone around 1.1235 has been standing as a prominent Supply Area where THREE Bearish Engulfing H4 candlesticks were demonstrated.

Bearish breakout below 1.1175 promoted further bearish decline towards 1.1075 where the backside of the broken bearish channel has been providing significant bullish demand so far (A Bullish Triple-Bottom pattern is in progress).

A quick bullish breakout above 1.1115 is needed to confirm the short-term trend reversal into bullish. This would enhance another bullish spike towards 1.1175.

Conservative traders were advised to have a valid BUY entry anywhere around 1.1070 (where the backside of the broken bearish channel is roughly located).

EUR/USD: plan for the American session on April 9. Euro buyers do not have enough strength for a new wave of growth

April 9, 2019 forex hitlist team Comments Off on EUR/USD: plan for the American session on April 9. Euro buyers do not have enough strength for a new wave of growth