POTUS finally tweeted about Bitcoin, and it had absolutely no effect. Considering the daily Twitter-tirade that Donald Trump spews, which covers everything from an all-out war with Iran to Robert Pattinson, a tweet about the $320 billion market was expected to have an effect on Bitcoin’s trade and currency charts 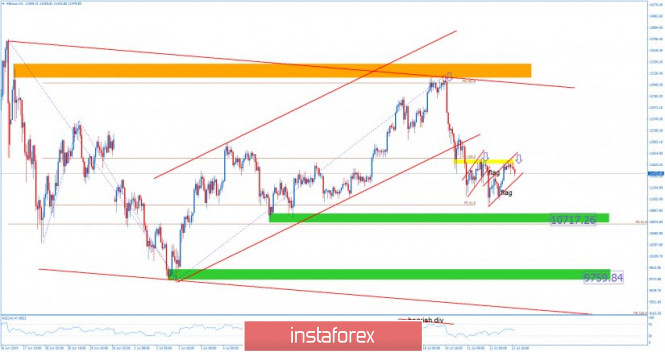 As I expected, the level of $11.700 did provide a strong resistance for the BTC. There is still more downside yet to come since there was a breakout of the upward channel (red up-sloping lines), which is good confirmation that downside pressure is strong. Most recently I found a second bear flag in creation on the 1H time-frame, which is good confirmation for further downside after the break of the channel. The RSI oscillator is having the bear cross.

Downward targets are set at the price of $10.726 and at $9.751. As long as the BTC is trading below $13.000, I would watch for selling opportunities. Important upward reference points: $11.700 – Previous swing low acting like resistance (yellow rectangle) $11.700 – Previous hourly swing high Important downward reference points: $10.726 – FE 61.8% (green rectangle) $9.751 – Important swing lowThe material has been provided by InstaForex Company – www.instaforex.com

GBP/USD: plan for the European session on October 28. The pound is waiting for important news on the grant of deferment of

October 28, 2019 forex hitlist team Comments Off on GBP/USD: plan for the European session on October 28. The pound is waiting for important news on the grant of deferment of