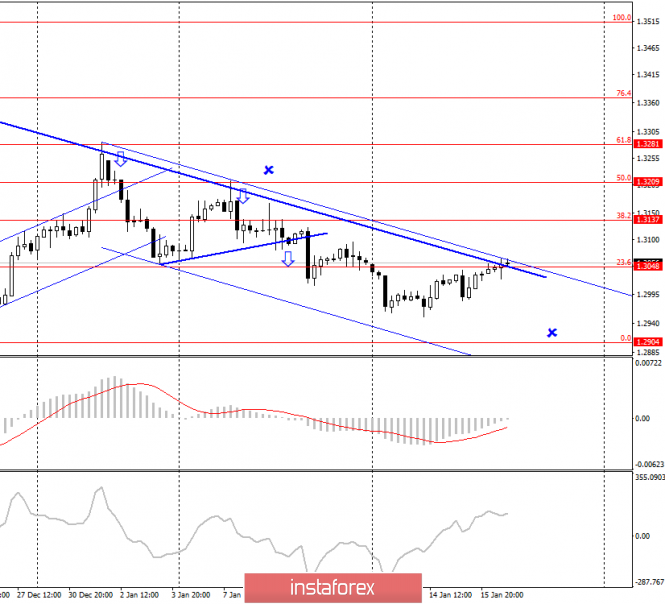 As seen on the 4-hour chart, the GBP/USD pair returned to the corrective level of 23.6% (1.3048) and threatens to consolidate above this level, above the upper line of the downward trend corridor, as well as over the upper line of the small downtrend corridor, which I built in addition and support to the large one. Thus, closing quotes above the indicated lines will work in favor of the British pound and continued growth in the direction of the corrective level of 38.2% (1.3137). However, even if the growth of the pound is short-lived, such closure will lead to the cancellation of all previous trading signals and a trading idea that implies a fall in the pound to the corrective level of 0.0% (1.2904). Thus, we are waiting and watching the behavior of the pair and traders around the level of 1.3050. The “foundation” for the British currency this week was expressed by a weak GDP report for November, a weak report on industrial production, and weak inflation. Thus, the current growth of the pound is quite an amazing phenomenon, given the set of “graphic” factors and the information background.

Forecast for GBP/USD and trading recommendations:

The current trading idea is still to sell the pound with a target of 1.2904. New rebounds from the upper lines of the corridors and the level of 23.6% again allow traders to sell the pair. Going beyond these lines will cancel the trading idea.

Trading Plan for EUR/USD and US Dollar Index for February 21, 2018