The global markets dominate with optimism so far. Stock indices of Asia-Pacific and European countries are trading in the green zone while gold goes below $1,500. Oil makes attempts to rise on expectations of a meeting of the OPEC + monitoring committee and an API report that showed a sharp decline in US oil reserves.

Expectations for the resumption of trade negotiations between the US and China are the main positive driver, but things have not yet reached real steps. So, the positive is still rather cautious.

The ECB’s big day on Thursday will finally bring the euro out of sleepiness. According to rumors, the bank intends to lower the rate by 0.1%, but surprises are not excluded.

Mizuho Bank noted that the profitability of 10-year-old Bundes has been growing for a week and reached the level of -0.53%. This could mean that the ECB may not meet market expectations and postpone the launch of the QE program in December, satisfied with the rate cut and the announcement of the launch of QE in January. In order to prevent too much hawkish reaction from the market, monthly purchases of at least 40 billion euros can be announced (while the market consensus is at 30 billion) but, as it turned out, there is no urgent need to launch QE tomorrow.

The latest UK labor market data were unexpectedly better than expected. Unemployment in May-July fell from 3.9% to 3.8% and wages, including bonuses and bonuses, grew by 4.0% against the forecast of 3.7%.

However, such strong growth is noticeable only at a distance of recent years. If we compare the current level of real wages adjusted for inflation, even steady growth in recent years is not enough to get out of the hole. The pre-crisis level of 2007 has not yet been achieved. 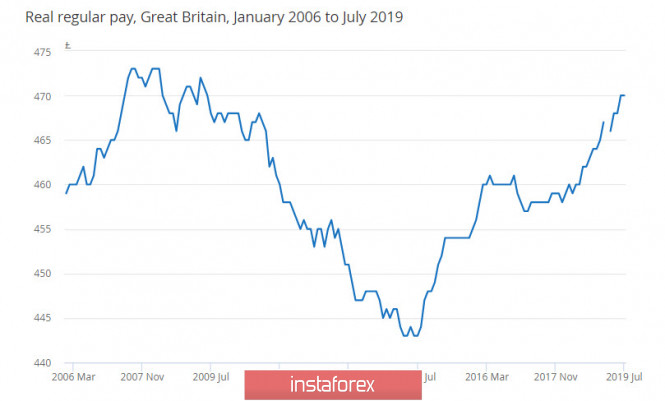 Nevertheless, the pound receives some support from the statistics, which allows it to continue to recover. The political background is also at this stage in favor of continued growth since the short-term effect of Boris Johnson’s unsuccessful attempt to persuade parliament to leave the EU on October 31 at any cost did not lead to success.

British lawmakers have set a goal to avoid the scenario of “hard Brexit” and, apparently, while winning. A bill passed last week obliging the government to postpone its exit from the EU to January 31, 2020, in the absence of a deal by October 19, definitely plays on the side of the bulls that also support the pound.

Moreover, the Laborites, who are in opposition to the ruling conservative party, called for a second referendum. Since the question of the country’s exit from the EU was officially approved by the queen in a throne speech on May 27, 2015, such a turn may indicate that the events went according to a completely different scenario and the exit price for Britain was much higher than planned.

The effect of the Brexit date transfer is unlikely to be lasting. Uncertainty continues to adjust investment plans in the direction of their reduction. The head of the Bank of England Mark Carney noted that the pound’s volatility is at the level of the currencies of developing countries, and risk premiums on the UK stock market increased significantly.

GBP / USD. October 10th. The trading system "Regression Channels". The British Parliament is preparing to vote on the Brexit

October 10, 2018 forex hitlist team Comments Off on GBP / USD. October 10th. The trading system "Regression Channels". The British Parliament is preparing to vote on the Brexit

Oil accelerated appreciation amid a recovery in stock markets

January 8, 2019 forex hitlist team Comments Off on Oil accelerated appreciation amid a recovery in stock markets