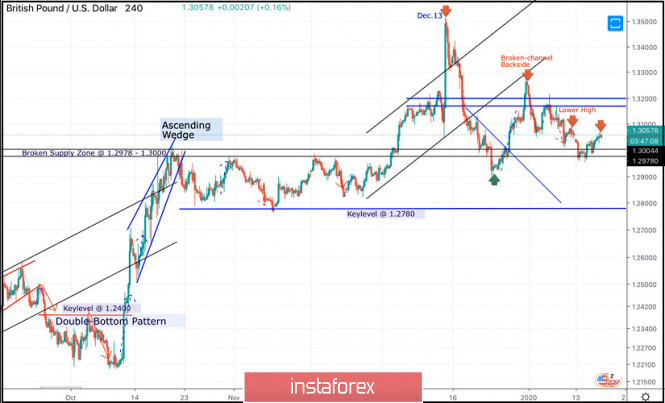 On December 13, the GBPUSD pair looked overpriced around the price levels of 1.3500 while exceeding the upper limit of the newly-established bullish channel.

On the period between December 18 – 23, bearish breakout below the depicted channel followed by initial bearish closure below 1.3000 were demonstrated on the H4 chart.

However, earlier signs of bullish recovery were manifested around 1.2900 denoting high probability of bullish pullback to be expected.

Thus, Intraday technical outlook turned into bullish after the GBP/USD has failed to maintain bearish persistence below the newly-established downtrend line.

That’s why, bullish breakout above 1.3000 was anticipated. Thus, allowing the recent Intraday bullish pullback to pursue towards 1.3250 (the backside of the broken channel) where bearish rejection and another bearish swing were suggested for conservative traders in previous articles.

Intraday bearish target are projected towards 1.3000 and 1.2980 provided that the current bearish breakout below 1.3170 is maintained on the H4 chart.

Please also note that two descending highs were recently demonstrated around 1.3120 and 1.3090 which enhances the bearish side of the market.

Bearish breakdown below 1.2980 is needed first to enhance further bearish decline towards 1.2900, 1.2800 and 1.2780 where the backside of the previously-broken downtrend is located.

In the Meanwhile, Intraday traders can watch any bullish pullback towards the depicted price zone (1.3170 – 1.3200) for bearish rejection and another valid SELL entry with intraday bearish targets projected towards 1.3000 and 1.2980.

Overview of the GBP/USD pair on November 29. Great Britain is out, is Scotland also out?

November 29, 2019 forex hitlist team Comments Off on Overview of the GBP/USD pair on November 29. Great Britain is out, is Scotland also out?