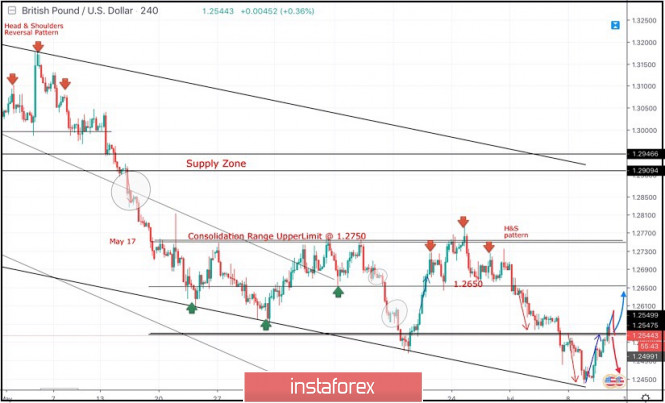 Since May 17, the previous downside movement within the depicted bearish channel came to a pause allowing the recent sideway consolidation range to be established between 1.2750 – 1.2550 with a prominent key-level around 1.2650.

On June 4, temporary bullish consolidations above 1.2650 were demonstrated for a few trading sessions.

Short-term outlook remains under bearish pressure as long as the market keeps moving below 1.2650 (mid-range key-level and neckline of the reversal pattern).

In general, the recent Bearish breakdown below 1.2570 – 1.2550 (the lower limit of the depicted consolidation range) confirms a trend reversal into bearish on the intermediate term.

Immediate bearish decline was expected towards 1.2505.

Further bearish decline was expected to pursue towards 1.2450 (the lower limit of the current movement channel) where early signs of bullish rejection were manifested.

The current bullish pullback towards 1.2550-1.2570 should be considered as a valid SELL signal for Intraday traders.

On the other hand, An Intraday bullish position can ONLY be considered if the current bullish rejection manages to bring the GBP/USD again above the price level of 1.2540.

If so, Intraday bullish target would be projected towards 1.2650.

Conservative traders can have a valid SELL Entry anywhere around the lower limit of the broken consolidation range near (1.2550-1.2570).

Intraday technical levels and trading recommendations for EUR/USD for February 13, 2017

Intraday technical levels and trading recommendations for GBP/USD for January 2, 2019