Jerome Powell quickly stopped the intention of the “bears” on EUR/USD to bring the pair’s quotes beyond the range of 1.12-1.14. In his speeches to the US Congress, the Fed Chairman made it clear that the Central Bank has grounds for reducing the federal funds rate. First, inflation leaves much to be desired. Secondly, Donald Trump’s trade policy creates a headwind for the American economy. The Fed is ready to act ahead of the curve. In 1995 and 1998, its preventive monetary easing saved the States from recession. In 2001 and 2004, when the rate was lowered in response to the deterioration of macroeconomic statistics, the recession could not be avoided.

If the Fed does not disdain monetary expansion when core inflation is at 2.1% and unemployment is at half-century lows, then why should the ECB restrain itself? Both central banks note the negative impact of falling inflation expectations on consumer prices, but in the eurozone, it is more pronounced than in the United States.

Dynamics of oil and inflation expectations 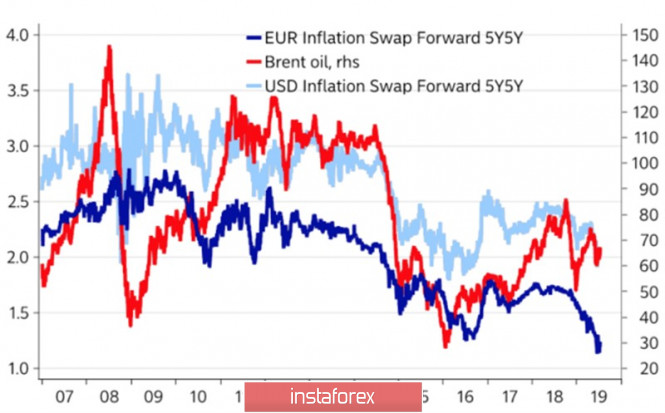 The June Protocol of the ECB Governing Council showed that officials will discuss the issues of lowering rates and resuscitation of QE. The market is set that the European regulator will give a signal to ease monetary policy in July, and will move from words to deeds in September.

If Frankfurt has more grounds for monetary expansion than Washington, why is EUR/USD growing? We have already discussed this issue. When two central banks soften their policies, the arsenal of tools they have is important. The Fed can reduce the rate by as much as 250 bp, or even more, while the rate on deposits of the ECB is already in the negative area (-0.4%). Simply put, the beginning of a cycle of monetary expansion in the United States gives speculators the opportunity to fix profits on long-term long positions on the US dollar and move to short.

At the same time, if the US economy shows resistance to external factors, then reduce the federal funds rate by 50 or 75 bp won’t be necessary. In this regard, the release of data on retail sales in the US in June is able to lend a helping hand to the “bears” on EUR/USD. The publication of these indicators and China’s GDP for the second quarter will be the key events of the week by July 19. Investors will closely monitor the state of China’s economy and the course of trade negotiations between Washington and Beijing.

Pressure on the euro is created by the growing risks of a trade war between the EU and the United States, the desire of the new Greek government to revise the budget surplus established by the European Union of 3.5%, as well as the possible occupation of Boris Johnson as Prime Minister of Britain. An ardent supporter of Brexit claims that Albion will leave the EU with or without an agreement.

Technically, the EUR/USD pair continues to consolidate in the range of 1.12-1.14 within the “Diamond bottom” pattern. The breakthrough of resistance at 1.132 will increase the risks of implementing targets for the models AB = CD (161.8%) and “Wolfe Waves”.

GBP/USD: plan for the American session on October 31st. Bulls are trying to push the pound to the maximum of this month in

October 31, 2019 forex hitlist team Comments Off on GBP/USD: plan for the American session on October 31st. Bulls are trying to push the pound to the maximum of this month in