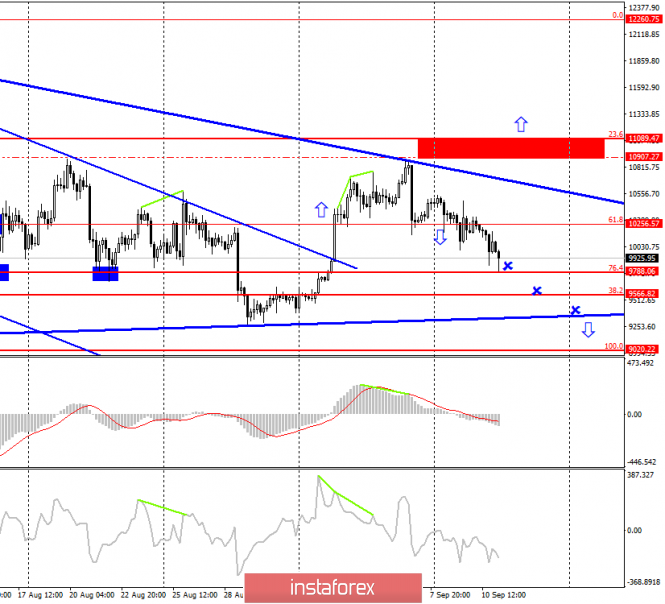 On September 10, the BTC rate fell to the correction level of 76.4% ($9788), which is the first goal on the way to the upward trend line, according to my expectations outlined in previous forecasts. The breakdown of the “cue ball” quotes from the indicated level will allow the number 1 cryptocurrency in the world to rise slightly, however, in general, I expect a fall to the Fibo level of 38.2% ($9566) and the trend line. Today, the divergence is not observed in any indicator. I also remind you that according to the John Bollinger’s forecast, “if the bulls fail to significantly improve their positions this week (meaning last week), then Bitcoin will face a serious drop, down to the levels of $4000 – $5000”. I believe that the bulls were not able to leap up, the downward trend kept the BTC from strong growth. Now, let’s see if the upward trend line of Bitcoin can keep from a strong fall.

Meanwhile, Blockstream CEO Adam Back reports that the bitcoin dominance index is currently returning to normal levels of 90%. Back says that until June 2016, this index never dropped below 99%. The real value of the index is now 95% if we exclude from the calculations the stablecoins and USDT (cryptocurrency tied to fiat money).

“The brilliant forecast” was made by the Head of ShapeShift crypto exchange Erik Voorhees. He believes that the BTC cryptocurrency will grow above $20000 per coin by the end of the year, but immediately declares that “he usually makes mistakes in forecasts.” Voorhees believes that any cryptocurrency is a long-term project and extremely speculative. Thus, Voorhees advises every investor to own bitcoins but to realize that it can completely devalue and the “bubble” will burst.

Bitcoin continues to fall in price, although not too fast. Based on the picture in the illustration, the most likely option is a decrease in the area of $9300 – $9400. The BTC rebound from the level of 76.4% allows to expect small growth of quotations, but the untrained goals of about $9566 and $9350 are forced to expect a decrease. If bitcoin, as I expect it, reaches the bottom line of the triangle, then the fate of the cryptocurrency will be decided around it.

Forecast for Bitcoin and trading recommendations:

Bitcoin performed consolidation under the Fibo level of 61.8%. Thus, I recommend selling a cryptocurrency with the targets of $9788 (76.4% of Fibonacci),$9566 (38.2% of Fibonacci) and $ 9400 (the bottom line of the triangle). About the first goal, you can partially take profits or exit transactions and wait for the situation to develop.

I do not recommend buying bitcoin now, as the cryptocurrency remains in a narrowing triangle, which implies a drop in the price of the “cue ball”.